The natural evolution of my finless surfboard obsession was realized recently when I came across some video of Derek Hynd surfing Jeffrey’s Bay on a finless board with deep channels in the tail.

I’ve been a fan of channels for a long time – my go-to board for the North Shore in college was a 6’ 10” thruster with deep channels. It was the fastest board I had ridden and would make sections that otherwise I’d get stuck behind.
Anyhow, Mr. Hynd’s boards are somewhere in between an alaia and a modern fiberglass board, with the funky tail. I’ve had success with my hollow-wood “Nohu” board – I’ve ridden it nearly exclusively since I made it. One of my lessons learned is that the tiny little twin fins on it bite almost as much as full-sized fins.   Between the rail, the tail design and those fins, it really held tight. Maybe too tight for what I was looking for.
So I took what I could glean from Hynd’s designs and combined them with my alaia and Nohu knowledge to come up with this “Hyndsight” design. It’s 6’10”x 21 5/8”, about 3” thick but with a good amount of foam removed from the tail concaves and the nose. The top and rails were painted to match my old Sunshine quad from 1984. The bottom…well, I let my creativity get the better of me. 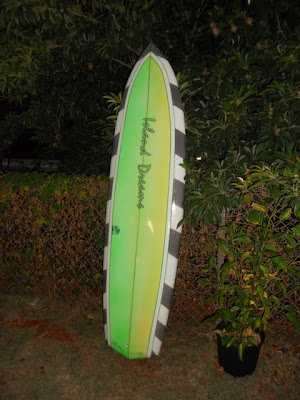 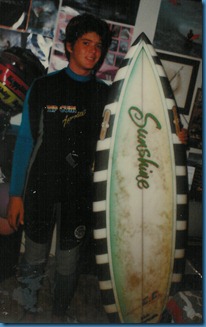 Left: The New model. Right: The inspiration from 1984. 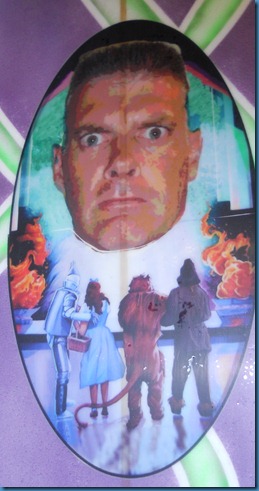 Above: Pay no mind to the man behind the curtain…
Posted by Rotorhead at 1:14 AM