The latest out of the shop is this unique alaia. Based on the success of the omilu model, I made

some changes that I hoped would be beneficial. First, more wood. The omilu was a bit to thin and too light, making it flex more than I would like. Additionally I don’t feel like it would hold up to  overhead waves. Also, maintaining more width throughout would help in catching waves and planing. The omilu tended to downshift once off the face. While fairly easy to maneuver, I felt it was too loose – particularly when in the flats, where it was a chore to keep it from spinning out.

So, I developed the uhu. Very little wood was removed from the blank – just enough to give it a nice outline.Unlike the narow waist of the omilu I went with a “stinger” tail, keeping the board wide up until the last 20 inches or so where the tail steps in. For control I went with a Catch Surf setup – rounded 70/30 rails up front and hard, inward-canted rails in the tail (Catch Surf hand-makes finless soft surfboards which are really taking off).  The bottom is the standard single concave, with the addition of a couple of channels in the tail to help keep it straight.

So how does it work? I took it out on a nice chest-high day at an empty reef break out by the Coast Guard air station at Barbers. It was perfect alaia surf – long, gentle lines with reforms and multiple sections. The board performed beyond expectations. It was markedly easier to catch waves than the omilu, allowing me to get in earlier and really set up my rides. It tracked straight – almost too straight, and I really had to use a shortboard-like technique to turn it, unlike the omilu which really needs a light touch. The only negative was that it really wasn’t any easier to paddle than the others (alaias are a MAJOR arm workout). The extra wood didn’t make a difference – it was essentially neutrally buoyant weight. The positive side of that is that you can duck-dive the thing about 6 feet no problem, and actually “swim” underwater with it.

As for the graphics…after cutting the outline, it just looked like an uhu (parrotfish). I bagged my first 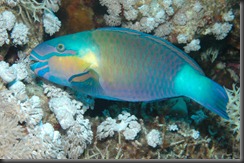 uhu a few weeks ago (granted a red-phase, not a bicolor) and that sealed the deal. I just wanted something interesting on the back so I made some camo stencils and went with an aquaflage scheme. The logo is again just a reflection on my current obsession of spearfishing. I couldn’t bring myself to put a camera mount on the nose – it would just ruin the art.

I’m really excited about riding this board this winter. This will be my “co-number one” along with a “normal” shortboard I’m making for more critical surf.